Having written and lectured extensively on the topic and treated thousands of patients, Dr. Greg Hall is an expert in Black American health & healthcare.  As an Associate Professor at the Northeast Ohio Medical University and an Assistant Clinical Professor at Case Western Reserve University, Dr. Hall’s healthcare experience with working with African Americans is second to none. As the former chair of the Ohio Commission on Minority Health and a board president of the Cuyahoga County Board of Health, he advocates for the elimination of health disparities across the county . . .  and the State of Ohio. Dr. Hall recently established the National Institute for African American Health.  This first-of-a-kind center will address African American health disparities and the social determinants of health.

He “wrote the book” on the medical care of African Americans.

Dr. Hall also has a monthly educational webcast for physicians, physician assistants and nurse practitioners titled “Bridging the Gap” on the Pri-Med online network that educates providers about the nuanced clinical treatment of African Americans.

Dr. Hall also developed Sequence Multivitamins for African Americans as the first tailored supplement designed to address research-confirmed deficiencies in the Black community.  The first-of-its-kind supplement includes more of some vitamins (vitamin D for example) and leaves out other vitamins that may potentially cause harm (vitamin E and selenium).

To provide the best personalized care is to apply the latest research information that pertains to African Americans.  Ignoring these “important differences” leads to worse outcomes and inferior care.  In hypertension, obesity, diet counseling, cancer screening and so much more, there are significantly different approaches to medical management in Black Americans.

The two top prescribed blood pressure medications have been proven to not work well in African Americans with high blood pressure and are actually associated to poor outcomes, yet a recent report confirms its continued use in almost a third of elderly African Americans. Too many clinicians fail to follow proven clinical guidelines for hypertension treatment. These sub-optimal treatment practices result in more strokes, heart attacks, and kidney failure in Blacks.

In the care of diabetes, the interpretation of lab tests that track control is different in African Americans, with a critical adjustment (or fudge factor) needed to be applied for proper interpretation and treatment. Unfortunately, too many physicians fail to be aware of this factor and put their patients at risk for serious side effects from the medications. 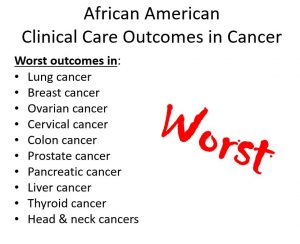 The occurrence of sleep apnea and all of its serious side effects is much higher in African Americans, yet screening for this sometimes deadly disorder is less when compared with Whites.

African Americans have the worst survival and increased complications in:

Yet screening and aggressive treatment in these cancers remains lower in African Americans.

Differences in Diet and Dynamics

Effective diet counseling in African Americans requires a basic knowledge of what African Americans eat. Too many providers fail to understand or appreciate the cultural impact of soul food, or proven ways to make an existing diet better.

Even smoking in significantly different in African Americans with the vast majority smoking more menthol cigarettes which have been shown to be associated with a higher nicotine burden due to deeper inhaling . . .  and is much harder to stop.  Smoking cessation counseling with this in mind is essential.

Smoking in African Americans has also be shown to increase their risk for diabetes. Too many Blacks actually avoid stopping smoking in order to NOT gain weight and get diabetes. Does their doctor know the difference? 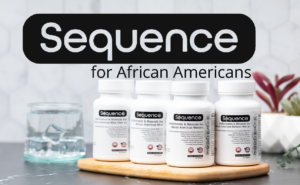