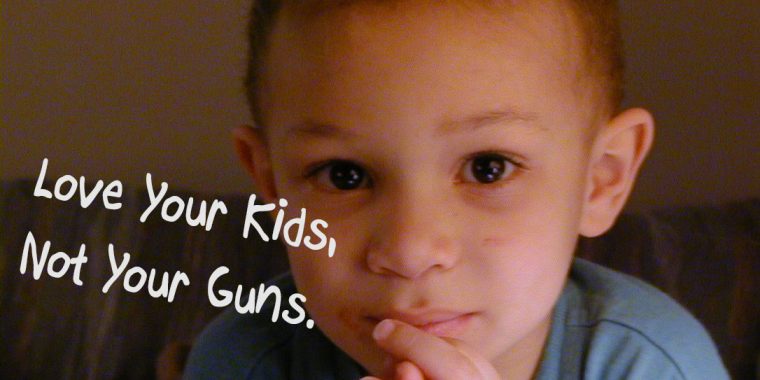 It’s silly that I have to write an article about something so obvious: Love your kids, not your guns.  I’ve wrongly stayed neutral about gun control because so many of my patients have and love guns.  And frankly, I didn’t want to alienate them.  I’ve said to myself, if they want to have assault weapons and an arsenal in the basement of their home, who am I to say what they do . . . . or what they have? Some people collect stamps and other people collect guns.  Collecting stamps never impacted so many other lives as collecting guns. The people that collect stamps really get into it.  They travel to foreign lands just to personally buy incredibly valuable stamps, and many I’m told, can never stop.  Their stamp collection is never complete.  Many of my friends and patients with guns have the same “story” where they collect various guns of different fashions and capacities . . . and their collections seem boundless as well.  Up to one third of adults engage in some form of “collecting” and for many Americans, guns are their passion.

Americans, by far, own the most guns per capita in the world, with over one gun per person. But gun ownership is highly concentrated with only about a third of Americans admitting to owning one.  And these numbers are decreasing from numbers in the 1970’s where the majority of Americans had guns. Among these “normal” gun owners is a small subset of “gun super-owners” who have huge collections that can result in well over one hundred guns.  Once they collect the usual hand guns and rifles for hunting or home protection, they migrate into bigger and more impressive gun collections that have the capacity for wide-spread devastation.  They buy rapid fire machine guns, grenades, silencers, and more.  They are not planning to attack anyone, but if someone attacks them . . . there’s going to be trouble.   This small number of law-abiding collectors do not want their ability, or access, to guns and ammunition impeded by laws that restrict what they can “collect.”

Why have all of these guns?

When admiring their gun collection, some “super owners” confess to imagining jumping into action at a moment’s notice.  They fantasize about heroic acts that will finally validate their collection.  Do I have enough guns to fight off an invasion of aliens like in the movie “Independence Day?”   What if aliens attack us?  Who will protect us?  The neighbor “gun super-owner” will come to our rescue. That’s silly.  Aliens won’t attack. What about some virus that “goes bad” and turns half of the world into the “Walking Dead” or zombies like in “World War Z”?  Then I’d bet you wish you had rapid fire assault machine guns to kill all of those “walkers”!   But how much ammunition would you need? Would it run out? Wait.  That’s silly.  You couldn’t store enough ammunition for that.  The zombies would eventually get us. What about some sort of invasion of the Russians (or whoever), and somehow the United States military would “break down” and then we would need to defend our homes and community from “the enemy?” Then we’d be happy we had military grade guns and ammunition to defend our freedom. That’s silly too.  They would just drop a bomb.

These “gun super-owners” are collectors.

They are not mass murderers.  They are also not saviors from some potential apocalyptic attack.  They are collectors that are simply obsessed with guns.  But their well-meaning obsession puts highly destructive weapons within the reach of other people who shouldn’t have them.  The gun collectors, like the stamp collectors, think they pose no threat.  But they do, and they have. That basement arsenal can be accessed by children, grandchildren, friends, neighbors, or simple criminals who would have no other access to these weapons except for your less-than-secure home security system. Are you ready to take responsibility for your guns no matter where they go, or what they do? The usual approach of “guns don’t kill people, people kill people” can no longer apply.  Over-prescribing opioids by doctors has been rightfully blamed for some of the opioid epidemic.  If the pills had not been in the medicine cabinet, the kids wouldn’t have experimented, and the addiction could have been avoided in some.   A massive campaign has begun to decrease the amount of opioids that are readily available . . . and no one has objected.  Where are the “pain pills don’t kill people, abusing pain pills kills people” objectors? They simply do not exist because its a silly argument. Gun super-owners mean well, but their right to bear arms (or collect arms) shouldn’t extend into our ability to educate our children in an environment free of military-style attacks. Assault weapons have no place in a civilized society. Love your kids, not your guns.