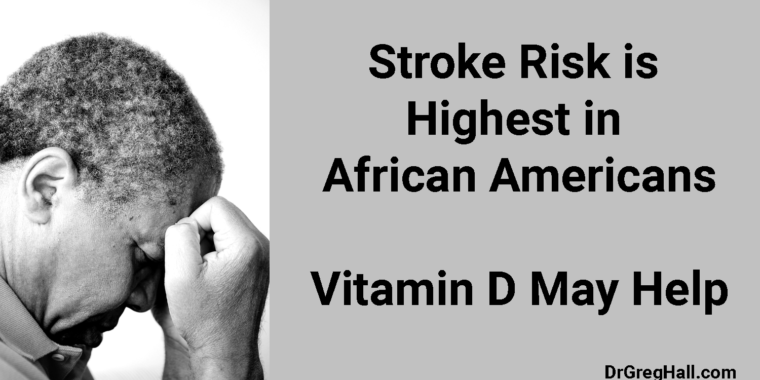 Recent studies have found a correlation between vitamin D deficiency and stroke risk as well as stroke severity. A study just published found that people with the highest vitamin D levels had fewer strokes and if they had a stroke, it was less severe.  People with low vitamin D levels had more strokes with more severe symptoms.

As you know, we get most of our vitamin D from the sun, but urban living, colder/cloudy weather, and lactose intolerance (so we can’t drink “Vitamin D Milk”) have all resulted in wide-spread African American vitamin D deficiency.

Studies have shown that hemorrhagic stroke patients (those strokes caused by a bleed rather than a blood clot) often suffer from low vitamin D levels. Another study suggested that putting stroke victims on vitamin D helped their recovery somewhat.

A Direct Effect Has Not Been Shown

To be clear, there has yet to be a study that showed taking a vitamin D supplement led to fewer strokes. These research studies are only able to find correlations and from these associations, they “suppose” that raising your vitamin D level will lead to better health.  Some researchers believe that poor health leads to low vitamin D levels and that is the reason sicker people have low vitamin D.

Vitamin D levels have been positively associated with improved cardiovascular health, especially with reduction of stroke risk. Until the controversy is settled, everyone agrees that leaving a low vitamin D alone is not a reasonable option.

Another study looked at COVID patients and vitamin D deficiency and found COVD illness directly related to vitamin D level.  COVID-19 is greatly associated with increased stroke and heart attacks so having a normal vitamin D level was somewhat protective against severe COVID disease.  Obviously the absolute best way to avoid COVID-19 is through getting an approved vaccination.

Sequence Multivitamins for African Americans have a science-based formula to best replace deficiencies in the Black community. Go to SequenceVitamin.com for more information on the multivitamin that is best for you.